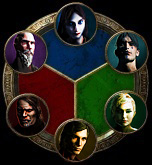 This Path of Exile Shadow Frost Build focuses on moving through the Shadow, Witch, and Templar trees for those magic buffs.

You're going to want to pick up a dagger with high crit. The standard is Kris which has 80% crit. The key is high damage, high crit. Later on you'll try to get Spell damage, cast speed, and increase to cold damage.

For the rest of the gear you're going to want to build in as many resistances as possible. Once you are capable of surviving you'll want to start increasing that Crit and Cold Damage.

Path of Exile Shadow Build How To:

Early on you will have some mana issues but can fix it with some rings mana regen items until you get pick up mana passives. To play this Path of Exile Shadow Frost build you will want to spam Ice Spear on enemies from a distance, freeze locking them. If the enemies are in a group you will want to be near them and use Freezing Pulse. Keep in mind you still want to maintain range or you may die to the damage, this takes practice. You'll also be able to use Whirling Blades which is nice for when you're in a pickle. In some cases, you may want to use Freezing Pulse to attack boss mobs since it does very large damage close range, don't. Normally the extra 30 seconds the fight takes using Ice Spear is worth the safety.

That's it for this Path of Exile Shadow Frost Build.
at 9:32 PM